Activities for Using Spell-Write Online with Your Class

The essence of the Spell-Write concept is that spelling is a writing skill. We learn to spell to write, to communicate with clarity. Spelling therefore needs to be embedded into the classroom writing programme. The process is this:

There are lots of activities that can be part of the class reading, writing and spelling programme or just a fun and worthwhile five minutes before the bell using Spell-Write Online. These can be quick- fire activities with individuals in the class or with the class organised in small groups for a challenge. Here are some: 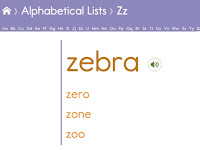 1. Find a word
Use the online alphabetical lists. Students find a given word. Have some words prepared in advanced that are at the reading level range of your students. Use words with different beginning sound Eg zebra, noisy, awesome, words that will challenge students to predict the order of letters in the word and the alphabet. Extend this to words that begin the same letter to learn about the order of sounds and letters within each word. 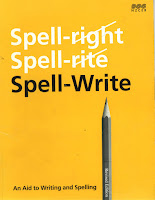 2. Print versus IT
Groups or individuals use the book or  IT device. Challenge the students to find a given word and be the first to find the word. Record the results, Eg best to 10 or 20. Change the groups around and begin again this way everyone gets to be part of a successful group. Where are your students quickest, with the book or online? 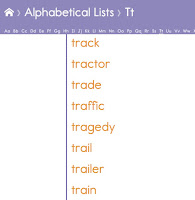 3. Find a word that...
Find a word that begins with 'th', 'tr', 'tw' etc... Use Spell-Write Online and/or the Spell-Write book. Adapt this activity to a particular skill your students are working on. Extend this by asking "How many can you find?" or "How many are listed?" Then move to another skill. 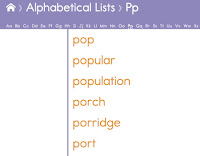 4. Order
This will work best when students can see the screen together. Open part of the list, Eg. pop to port. The challenge is for the students to predict the beginning letter of the word before the ones on the screen. Then the first two letters of the word, then the first three letters and finally the word itself. Now this activity is repeated with the words that come after the last visible word on the screen. Now move to another set of words.

5. Search
Open the 'Groups of Words' section of Spell-Write Online. Have some words ready for the students to search for Eg Autumn, moment etc... Students race to find the word as individuals or in groups. Once the word is found they then have to explain why the word is in this category and the criteria for ordering the words in this list..

Keep the pace of these activities fast and achievable, but always light-hearted with success for all possible. The skill of the teacher will produce positive outcomes for everyone. Enjoy.

Posted by Noeline Anderson Director of Pixelhouse at 16:05 No comments:

The best predictor of future success is success now. It is not the size of the success that is important, it is success itself. With this in mind what will give a child the most success and desire to continue learning their words in their ‘Word to Learn’ List, a tool in the Spell-Write Online site, www.spell-write.nz

What will give them a positive start to build on?

1. Use the words a child has difficulty with when writing.
Why?

·
2. Begin with a small number of words, three to five words.  Why?


3. Use the animation and poster available in the ‘Words to Learn’ section to inform the ‘How to Learn a Word’ process. Why?
(If you have a mac it might not show the below video so go here )

A child will need to have words entered into their 'Word to Learn' list to access the interactive ‘How to Learn a Word’ process.

Posted by Noeline Anderson Director of Pixelhouse at 16:14 No comments: 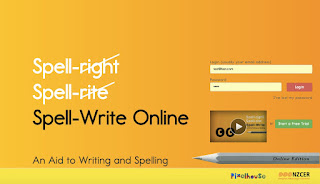 If you have been involved in education like me for a while you will know Spell-Write. It has been part of NZ classrooms since it was first published in 1983. Over the past year my company Pixelhouse, in partnership with NZCER, have worked with students and teachers to bring Spell-Write online. www.spell-write.nz
As I began this project I was intrigued to find out what it is that has made Spell-Write so successful. To get to the essence of literacy education so that Spell-Write online could continue the success of the Spell-Write books.
It turns out the success of Spell-Write is entwined with the success of NZ Literacy Education which owes much to teachers of the past. Teachers who took risks. Teachers like Sylvia Ashton Warner and Elwyn Richardson. Teachers who found themselves away from the gazing eyes of bureaucracy, who could work closely with their students and ‘become’ the teacher their students needed them to be.
Over my years of teaching I have had the privilege of working with teachers such as these. Teachers with passion and commitment that give new insight and wisdom. Sylvia and Elwyn recorded their experiences so we can be inspired by their experiences and understandings.
Sylvia in her book “Teacher” talks about Key Vocabulary. The process of using words to begin to teach a child to read and write, important words that have intense meaning for the child. She conversed and listened closely to her students as the arrived for the day. She captured on a large card with a black crayon the one word that for that child had a ‘big inner picture’. These words became the basis of their spelling and writing programme. Spell-Write had its early beginnings here. Sylvia describes it as the ‘moulding together of spelling and comprehension’.
Elwyn Richardson worked with older students, year 4 to 8 students. His students had words they knew and they could write sentences and stories. He saw his role as helping them add depth to their writing. He took his students out into their world, their environment. Elwyn saw talk as the beginning of things, talk and looking closely. From these conversations and observations came a connection, an emotional attachment to the thing being analysed and observed. Once an emotional response was captured‘ intense feelings had to be expressed’ through art, drama and writing.
On Friday afternoons the students would share and discuss their work. When there was energy for this it had been a good week. It was a starting place too. A place to find the bits that had given difficulty and the skills that would be helpful to master. This became the content for the following week’s lessons.
Spell-Write built on these treasured findings. NZCER research found the words students most commonly used in their writing and put them in a book, Spell-Write. Now children could find the words they needed to write, quickly. The Essential Lists narrowed these alphabetical lists down to the ‘most commonly used words’, the words that are the most useful to know since a child is likely to use them. The Essential Lists were intended as a teacher’s guide, not lists to learn.
Now Spell-Write Online www.spell-write.nz provides each word with an audio file with common NZ pronunciation. And there is more. A place to store words that have ‘a big inner picture’ and a place to write, to express their ‘intense feelings and new understandings’ and  for the teacher a place to find out the skills that would be helpful for that child to know. There is more, but that’s for next time.
Posted by Noeline Anderson Director of Pixelhouse at 21:08 No comments:

Noeline Anderson Director of Pixelhouse
Pixelhouse makes online resources for literacy using an integrated curriculum approach. In 2016 I am providing PLD for Spell-Write Online and The 20/20 Literacy Programme (20 eBooks to teach 20 Sight Words).